A Cruise on Loboc River

For many years, it has been on our wish-list, and this time our program would finally include a trip on one of the well-known floating restaurants on Loboc River.

We arrived in Tagbilaran early in the morning to meet with some guests arriving from Manila. Their flight got delayed somewhat, so we took the opportunity to first visit the Casa Rocha-Suarez, an ancestral family house in Tagbilaran, which was recently (April 2005) opened as a museum (note: the museum is no longer open for visits). This house, over a century old, had been restored, and now houses several historical artifacts that relate about the previous owners, and give an impression of upper-middle class life in the late Spanish and early American era. Particularly nice are the window shades, carefully made from shells in a wooden frame. These frames can slide aside to let in fresh air, or block sunlight, as the time of the day dictates.

After some time, our guests arrived, and we left for Loboc, where the floating restaurant would depart. This is a easy 30 minute ride, which passes through Barangay Bool, where you can see the Sandugo Monument, and Baclayon, which has one of the nicest old churches in Bohol, and a small museum with old church relics. If you look at your right hand side while driving to Baclayon, you can also see a very big Balite tree.

In Loboc we first visited the church. The parish church of Loboc is certainly worth the visit, and has several attractive murals on the its ceilings. Attached to the church is the old convent, which is unique in its three-story design. Nowadays, the convent serves as the parish office, but also houses a small museum, and, when lucky, you can hear the famous Loboc Childrens Choir practice here. The basement of the convent houses a small exhibition dedicated to the musical history of Loboc, and the various prizes won by the Choir are on display here as well. You can buy CDs of the choir at the entrance of the museum.

The Loboc church lies adjacent to the Loboc River, close to a concrete bridge to nowhere that has become a monument to wasteful planning and corruption in Bohol. The bridge is not complete, and to complete it, the centuries old Loboc church will need to be demolished. Luckily, that has been avoided. Rumour has it that this bridge was actually never to be build at all, but should serve as a cover-up for some scheme to funnel public money to private hands. Somehow, the scheme was thwarted, and the bridge got actually build... The best thing that can be done is demolish it, but that would again cost another 50 million pesos of public money.

Near the church is also the departure place of the floating restaurants. These floating restaurants consists of two banka-hulls, over which a large wooden platform is placed. On this platform, numerous tables are placed, and a band plays music. Different boats play different styles of music, so, if you make a careful choice, you can dine with your favourite music. On our boat, they were playing mostly popular jazz and blues style music, which, although you would expect it on the Mississippi, was definitely not out of place here as well.

As the boat takes of, the buffet begins. On the middle table all kinds of Philippine delicacies are presented, and while eating, you can enjoy the lush green landscape slowly sliding along your table. The small outboard engine works hard to move the vessel against the current. Life along the river side goes on as it must have done for centuries, with children swimming, people passing by in small bankas or canoes. On certain points along the trip, daring kids climb in a large coconut tree overhanging the river, and jump in the water very close to the floating restaurant. 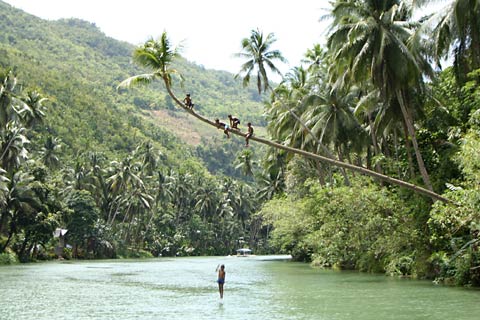 The end of the trip, which takes about an hour is Busay falls. The falls are not high, about one and a half meter at most, but mark the point where the floating restaurant cannot go any further, so here they stay for a while to allow the guest to look at the landscape. After some time, the return trip starts. Going downstream, we return much faster to our point of return.

Not far from Loboc, we pass the Nuts Huts Resort, a small resort located on the eastern bank of the River. This idyllic spot would make a great base for futher exploring the environment, or to just relax.

During the final part of our trip, we where astonished to hear one of the tourists joining the musical band, as some old Platter songs where being played... Had we heard that voice before? It sounded familiar. After an applause, the mystery singer revealed that he was Bobby Soul, one of the original members of the Platters, now also visiting Bohol!

On our way back, we passed by a large cage holding some tarsiers: these small primates are a symbol and trademark for Bohol. Before, there used to be a number of small ugly cages, where these animals where kept where kept in appalling conditions. No way should people treat those interesting but shy nocturnal creatures in such a bad way! Now, these cages have been replaced by one larger one and a DENR (Department of Environment and Natural Resources) permit has been obtained. However, we still feel that this large cage is actually harmful for the tarsier: too many people come too close to the animals, constantly use flash-photography, and they are still touched and handled many times a day, in spite of the conditions of the permit. We advise all visitors to skip this 'attraction' and visit the Tarsier Information Center in Corella instead. Although still in a segregated area, here you can see tarsiers in their natural environment! You won't be allowed to touch them, but that is actually much better for the animal.

After completing our river cruise, we continue our tour of Bohol with a visit to the Chocolate Hills in Carmen. Here you can actually climb on of the higher trees, and have a great view of these eyrie hills, that cover much of the central part of Bohol.

On our way back, we pass through the Man-Made Forest of Bilar. This is a thick forest, started about 50 years ago, and still being expanded. Under the trees, it is surprizingly dark and cool.

After a short visit to the Baclayon Church, we returned to Tagbilaran about 5 o'clock in the afternoon, satisfied with a day well spend. The Loboc River Cruise can certainly be recommended.

Read all 55 comments by readers.

This article has been viewed 2021 times.

Windows made from Shells

Artifacts on display in Casa Rocha-Suarez

On Board a Floating Restaurant

Loboc Church from the River